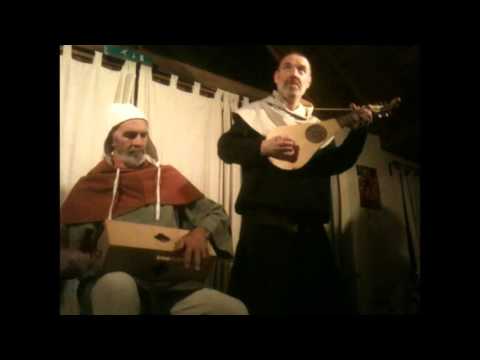 The Night Watch (Ian Pittaway on gittern, Andy Casserley on simfony) play La Quinte Estampie Real (The Fifth Royal Estampie) from one of the oldest manuscripts of French courtly repertory, Manuscrit du Roy, compiled c.1250 (songs) and c.1300 (dances). With thanks to Derek Lovell for filming. 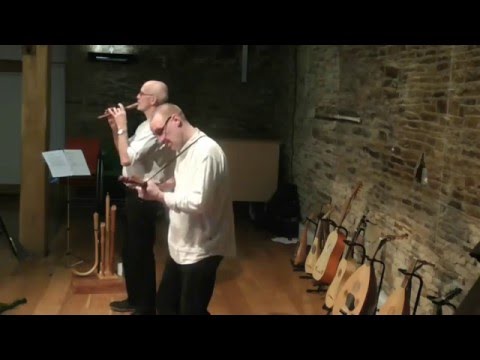 The Night Watch: All in a Garden Green / Gathering Peascods

'All In A Garden Green' appears in 1565-6 in the Stationers’ Register, recording 'All in a garden grene, between ij lovers; a Merrye new ballad of a countrye wench and a clowne'. Another song of an outcast lover, to 'All in a Garden green', appears in 'A Handfull of Pleasant Delites', 1584, by “Clement Robinson and Divers Others”. However, neither set of words fit this tune, though they do appear to fit the altogether different 'All in a Garden green' set by William Byrd in the Fitzwilliam Virginal Book, early 17th century, so it is entirely possible that the two earlier 'All in a garden green's are musically unrelated to that in 'The English Dancing Master or Plaine and Easie Rules for the Dancing of Country Dances', compiled by John Playford (1623-1686), first edition, 1651, as played here.

That is followed by a tune which musically shares the notes of the first 8 beats, 'Gathering Peascods'. Twenty or thirty years before Playford's collection it was intabulated in the personal lute music collection of Margaret Board, c.1620-30. A peascod is a pea pod. 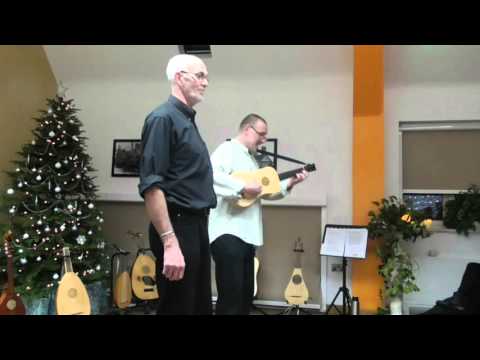 The Night Watch: It was a lover and his lass (Thomas Morley)

'It was a lover and his lass' is from 'The First Book of Airs to Sing and Play to the Lute with the Base Viol' (1600) by Thomas Morley, now most remembered for his settings of songs in William Shakespeare's plays and for his madrigals. For a time, Morley lived in the same parish as Shakespeare, giving rise to speculation that the two men may have worked together, though there is no concrete evidence for this.

'It was a lover' appears in its entirety in 'As You Like It', Act 5, Scene 3, sung by the Second Page, with one word change: Morley’s “country fools” becomes Shakespeare’s “country folks”, an understandable alteration. 'As You Like It' was written 1599 or 1600, so Shakespeare may have incorporated the song as a favourite from the Morley book of the same year, or else he wanted to include a song already popular with the public. In the days before copyright and when authors and musicians freely ‘borrowed’ from each others’ work, it is not inconceivable that Shakespeare wrote the words and Morley the music specifically for the play, but since Shakespeare receives no credit in Morley’s book, which would have been a personal slight and a professional oversight, it is highly unlikely.

Thomas Morley was an organist at St Paul's Cathedral. He and Robert Johnson are the only composers to have, depending on your viewpoint, either written songs Shakespeare used in his plays for which the music has survived intact or made contemporary surviving settings of verse in Shakespeare’s plays. 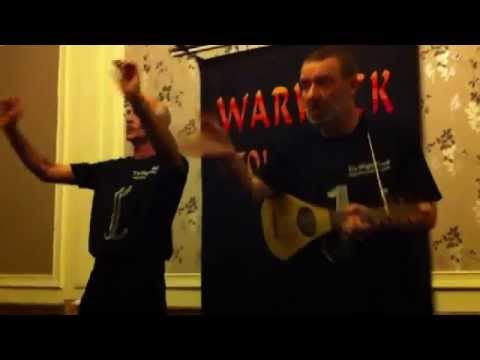 The Night Watch : Sumer is icumen in (Warwick Folk Club)

'Sumer is icumen in' - in modern English, 'Summer has come in' - is the second oldest surviving English secular song, celebrating the sights and sounds of summer, written down c.1250. The song is a round (everyone sings the same part, but starting at different times), which can involve up to six singers plus those singing the ground bass (repeating bass line). This was recorded as a two part round with the audience singing the ground bass. Thanks to Warwick Folk Club. 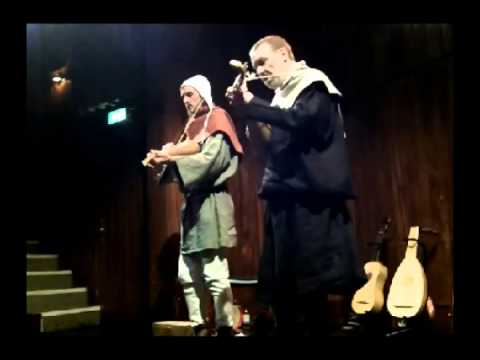 'Lollay lay lay lay' is from a collection of words to carols in English and Latin (MS S.54 at St John's College, Cambridge), dated 1470s-80s. The fact that the book includes no music and is quite fragile (the folded papers only survived because they are stitched into a scruffy and ill-fitting vellum wallet), suggests that it was not a script for performance; though the unity of contents suggests the book was used as an aide-mémoire for two people serious about carolling.

At this point in time, a carol was not merely a Christmas song - it wasn't until c.1550 that 'carol' took on its modern meaning. These carols were round dances, sung by the participants. They were often sung with no musicians: the dancers provided their own rhythm by singing the chorus - always sung first - and the leader sang the verses while the circle stood still.

Since there was no music, Ian of The Night Watch composed some in keeping with the period.

Played on rebec and gittern from The Night Watch's show, 'Drive the Cold Winter Away', Midlands Arts Centre (MAC), 7 December 2012. 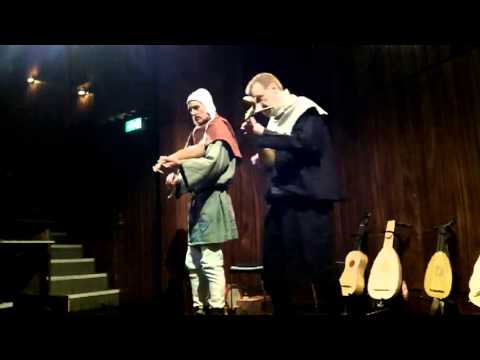 'Noël nouvelet' is a traditional French new year carol, originating in the early 15th century and becoming one of the most popular of the 16th century. The earliest complete source for the words is the Arsénal ms. 3653 in Paris, copied in the 1490s, a beautiful representation by a professional scribe for a high born family of the different types of noël or Christmas song in the French oral tradition. The Arsénal ms. does not give the tune, which did not appear in writing until the 17th century. The words used here are selected and translated from the 'Grande Bible des noels, tant vieux que nouveaux' ('Large Book of carols, both old and new'), published in 1721. The refrain, "Noël nouvelet, Noël chantons icy" means roughly, 'New Christmas song, Christmas song sing here!' The hymn writer John M. C. Crum made the tune more widely known by setting his hymn, 'Now The Green Blade Riseth', to it in 1928. 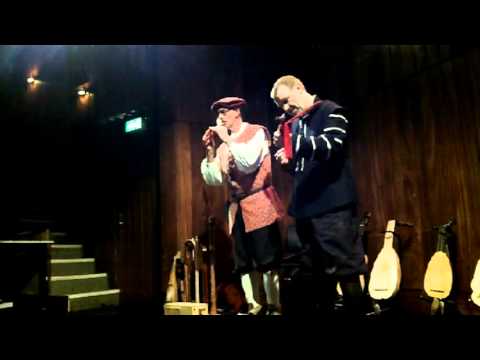 'Holde thy peace' and 'Three merry men' are mentioned in Act 2, Scene 3 of William Shakespeare's 'Twelfth Night' (c.1600-1601), a scene which is full of music and musical references.

The words and music of 'Three merry men' are included in a 17th century common-place book, date unknown, in the handwriting of the same John Playford who compiled and published 'The Dancing Master'. The words of the song are also quoted in an anonymous tract of 1605 (by C.T.), 'Laugh and Lie Down', and quoted or sung in many contemporaneous plays. There is only verse and it is not a catch or a canon, but we have made it one. 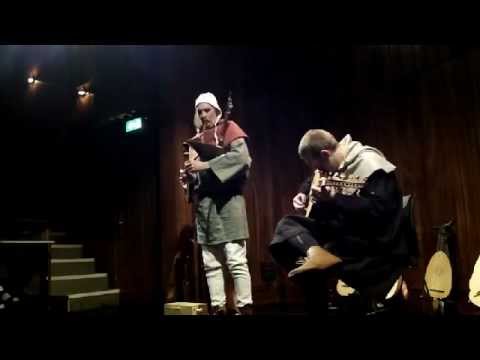 The Night Watch: dance on Cantiga 353

Cantiga 353 is from 'Cantigas de Santa María' = 'Songs of Saint Mary', a song book compiled during the reign of Alfonso X, El Sabio (The Wise), 1221-1284, King of Castile and León. Almost all the songs have melodies taken from existing compositions; the words were written by the king himself, largely miracle stories about the Virgin, the rest songs in her praise. It is one of the largest collections of monophonic songs from the middle ages and its beautiful illustrations are an invaluable source of information about the musical instruments of the day, including the oud and bagpipes played by The Night Watch on this piece. For more on the oud https://earlymusicmuse.com/oud/ For more on the Cantigas https://earlymusicmuse.com/troubadours-cantigas/ 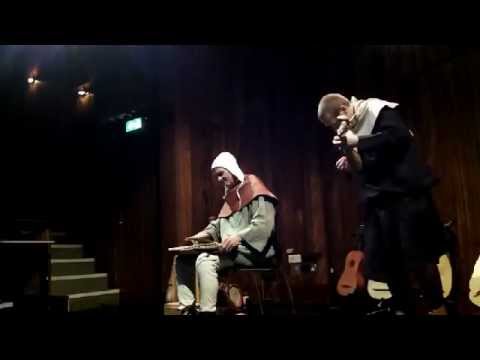 The Night Watch : There Comes A Ship A-Sailing

'There comes a ship a sailing' is a traditional German nativity carol which accumulated verses through the late mediaeval, renaissance and early baroque periods. The first two verses are from a ms. dated 1470-80, now in the Royal Library, Berlin; the remaining verses are from Jan Suderman, 'Gesange' ('Song'), 1626; and the melody is that given for it in 'Andernach Gesangbuch' ('Andernach Hymns'), Köln, 1608. Ian of The Night Watch has made his own attempt to put the original German words into modern English.

Played on psaltery and gittern from The Night Watch's show, 'Drive the Cold Winter Away', Midlands Arts Centre (MAC), 7 December 2012. 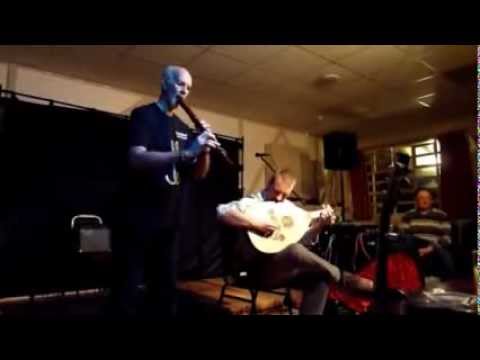 The Night Watch play Lamento di Tristano & La Rotta, recorded at The Woodman Folk Club. These paired anonymous dance tunes are from Italy, c.1390, in the Harley 29987 ms., now in the British Museum. It was common for dances of later eras to be paired, most notably the slow, elegant pavan and the lively, energetic galliard of the renaissance. We don't know who the Tristano of the title was, but it is possible that it relates to the tragic story of Tristan and Isolde, which inspired much music over the centuries.

The rotta is a mediaeval stringed instrument, a type of lyre which developed from the ancient Greek kithara or cithara. Examples of early rottas are found in miniatures from the 8th to the 14th century. An actual instrument was found in an Alamannic tomb in the Black Forest, dated 4th-7th century, now preserved in the Volker Museum, Berlin.